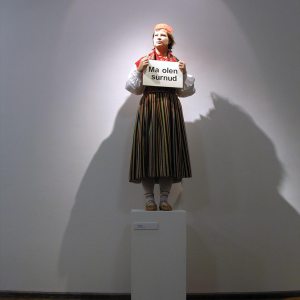 ESTONIAN SCULPTURE (“I am dead”)

The figure of a girl in folk clothing has been one of the central
equivalents of nationality throughout the history of Estonian
professional art: at the end of the 19th century she symbolized
the mother of nationality and the advocator of traditions; during
the Soviet rule she expressed the hidden patriotic feelings of an
occupied nation. Yet Estonian contemporary art consistently deconstructs
the figure of the woman in folk clothing, her national
identity and traditional values, and also questions the national
ideology that is cultivated by the country.
Flo Kasearu’s (born 1985) living sculpture declares the woman
in her folk clothing dead. The artist is the protagonist of her work:
she is standing on a pedestal like a monument from the Modernist
era, raised higher than the rest of the human race. There is
an aloof look in her eyes. She is illuminated like a sculpture ought
to be. A classical full figure that is holding a sign in its hand, announcing
its own death – I am dead.
How to interpret such an act? Who is dead? Is the Estonian artist
dead? Or has the monument as such come to its end? Is figural
sculpture as an art form becoming extinct? Is a small nation in
the periphery of Europe dying out? Or is it an announcement of
the death of national art? Is the sculpture the prophecy or the statement
of death? Has the myth of a nationality really collapsed?
Have the basic symbols of a nation and its narrative really run
empty in substance and thus lay dead? The artist does not offer
the answers – we must find them ourselves.